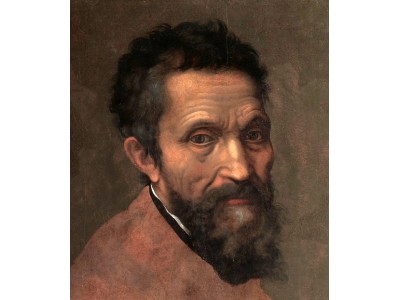 Identical copy of Michelangelo's David placed in 2004 (on the occasion of the 500th anniversary of the realization of the work) in the location that it originally had on one of the external spurs of the Cathedral of Florence, before it was decided to place the sculpture at the entrance of Palazzo Vecchio The courtyard of Palazzo Medici-Riccardi Michelangelo's David, in Gallery of the Accademy in Firenze 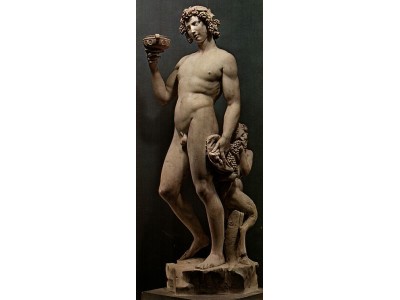 Michelangelo’s Bacchus, now preserved at the Bargello Museum in Florence

The meeting point for this tour will be by the Colonna dell'Abbondanza, in the middle of Piazza della Repubblica, once the heart of Florentia, the Roman Florence. In Piazza della Repubblica will take place an introduction to the figure of Michelangelo Buonarroti, a real giant of the world of art, who spent a large part of his long life here in Florence. The cathedral area, located a short distance from the meeting place, where we will head to, will permit me, instead, to introduce Michelangelo's most important work: the David, created in the beginning of the XVIth century to be initially placed outside the Duomo. But, due to its exceptional result, this position was then changed in favor to the entrance to Palazzo Vecchio, where there is now a faithful copy of that statue. Going back a few years in his life, a quick stop at Palazzo Medici-Riccardi’s courtyard will give me the possibility to talk about the very important years, during the youth of Michelangelo, that he spent living together with Lorenzo the Magnificent and his family in that palace. Palazzo Medici is also important because it introduces another city area closely linked to our artist: Piazza San Marco and the so-called garden of San Marco, where Michelangelo, under the Medici aegis (the place, infact, belonged to them) learned to sculpt. A visit to the Gallery of the Academy of Florence, house of the David and other statues created by Michelangelo, or to the Bargello Museum, the current home of Michelangelo's Bacchus (the statue that served as a visit card for the artist at the time of his arrival in Rome) and another couple of his important works, will be the perfect conclusion of this discovery of Michelangelo’s world.