The Chiostro dello Scalzo and its frescoes 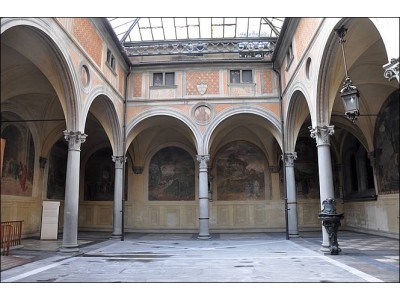 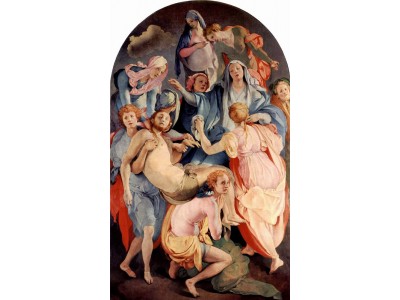 This one is a somewhat different tour, focusing itself on one of the most interesting Florentine artistic seasons, the Manner, and its three most important protagonists: Andrea del Sarto, Pontormo and Rosso Fiorentino. The idea is to introduce these three giants of Renaissance through their most significant works they left in Florence, sometimes located in almost unknown places. In this way the people can understand that great artists could work also in minor contexts, that were and are essential part of the enormous value of Florence as a city of art par excellence, great also thanks to its less known, but not less important, places. Is in the almost hidden Chiostro dello Scalzo, located a short distance from Piazza San Marco, where the tour will start to take place. In that little setting Andrea del Sarto deployed his sublime art presenting the stories of Saint John the Baptist, all painted in monochrome. Andrea worked also in the nearby Chiostrino dei Voti - where the tour will move to -, a sort of monumental entrance to one of the most important churches in Florence, the SS Annunziata. There, alongside Andrea, took their first steps into the world of art also his two most important and promising disciples: Pontormo and Rosso Fiorentino, the other two protagonists of this tour. This place is indeed a unique opportunity to admire, side by side, those who were among the undisputed protagonists of the Florentine artistic scene (and not only), of the first decades of the XVIth century. Before continuing in the discovery of these great painters, we will stop for having lunch and catching our breath. After lunch, two other places will give us the opportunity to appreciate Rosso Fiorentino and Pontormo up close, in contexts that will see them as absolute protagonists: inside the Medici's church, San Lorenzo, where Rosso created the beautiful Marriage of the Virgin, and inside of one of the oldest churches in Florence, Santa Felicita, where Pontormo created the decoration of the beautiful Capponi Chapel, located at the entrance of the church.