Colonna dell’Abbondanza in Piazza della Repubblica, meeting place where to start the tour Reconstruction of the forum of Florence during the Roman period 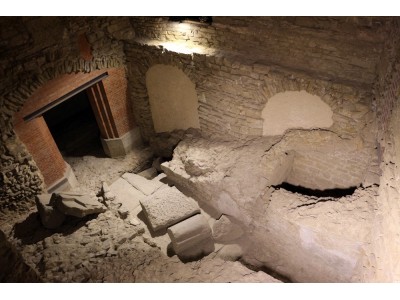 Palazzo Vecchio, underground with excavations of the ancient Roman theater of Florence View of the interior of the 'Fishing Lab' restaurant, where you can see the remains of the Roman era under the glass floor

Although few people know it, Florence was born well before the Middle Ages and the Renaissance, periods for which it is famous, rightly, all over the world. The birth of the 'Cradle of the Renaissance' in fact is traced back by archaeologists to the first century BC, when a Roman colony, renamed Florentia, was founded. The idea of this tour moves precisely from the desire to try to fill this gap concerning the origins of our city, trying to touch all those that are today the places and the most important evidences connected with its Roman past. Piazza della Repubblica will be the meeting point in relation to the fact that in the Roman time this was the real center and fulcrum of Florentia, the forum, the most important square, seat of political and religious power. From here we will then move to other areas in Florence for going to see Roman remains, such as those regarding what was the South Gate of the city, today located 4 meters below the current street level, in the New Market area. From there, after a quick visit to the Arno river for finding the exact point where the only bridge existing in Florentia was located (near the current Ponte Vecchio), we will then move to visit the remains of the Roman theater - located partially below Palazzo Vecchio -, recently opened to the public. Another very interesting area concerning Roman Florence is undoubtedly near Santa Croce church, and in particular the small and little known Piazza dei Peruzzi, which has the distinction of having palaces set on the ruins of the Roman amphitheater, which gives them the typical elliptical arrangement. In the square there is also one of the most characteristic restaurants of Florence, 'FrancescoVini', built inside the masonry (thick) of the Roman amphitheater; some remains are still today visible. This could be a good place to stop also for having lunch all together.

Alternatively, for the fish lovers, another option for eating can be the brand new ‘Fishing Lab’, located in via del Proconsolo, housed inside a medieval building - formerly the seat of the Gild of Judges and Notaries -, built on the remains of a Roman period structure. The day will end with the exploration of Via del Proconsolo, an important street of Florence that has maintained, in specific spot, the remains of the Roman defensive structures, which here insisted, being part of the east section of the Roman walls. Eventually, having enough time and energies, we could also visit the small Roman baths located under the Hotel Brunelleschi, between Palazzo Vecchio and the Duomo.

Entrance fee: 4 € to see the remains of the Roman theater underneath Palazzo Vecchio